Have a promo code? Enter it below to see your savings applied across the site!

Your promo has been successfully applied for the following promo: 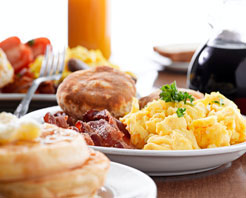 Hasty 183 Diner is located in one of the area's most pleasant settings and is known for its delightful staff and superb cuisine. The menu at Hasty 183 Diner features a wide array of great selections, made from only the freshest and highest quality ingredients, with something sure to please every member of your group Hasty 183 Diner has established itself as one of the area's favorite culinary destinations and is sure to offer you a pleasant and unique dining experience every time you visit. Please stop in soon!
American
- $

Delicious chopped beef battered and fried to a golden brown, then smothered in our country style gravy

$7.49
Say no more! Our traditional breakfast of two large AA eggs, hashbrowns or American fries, toast and your choice of bacon, sausage links or patties or, ham steak

$7.89
A generous portion of our a delicious corn beef hash served with our usual sides

$7.95
Ground beef breaded and fried to perfection and topped off with our creamy country style gravy

$10.49
Treat yourself today and include in this tender 8oz sirloin steak prepared, just how you like it

$8.29
A half pound of our fresh Angus beef hand pattied and prepared for you to enjoy. Usual sides included

Not So Green Eggs and Ham

$7.49
One of our thick cut ham steaks, diced and scrambled together with three eggs

$9.79
Smoked and ready for you to enjoy, this eight ounce chop will make your mouth water

$7.99
A little twist on an old favorite, use your imagination and build a Benedict from these choices and top them off with your choice of hollandaise or country style gravy. Choose your meat: sausage patties, bacon, ham steak. Choice of grain: English muffin, buttermilk biscuit, or choice toast

$7.99
Diced green peppers and onions scrambled up with two eggs, set atop an English muffin and ham steak with a drizzle of hollandaise to finish it off

Build Your Own Breakfast Sandwich

$7.69
Two eggs, hashbrowns, and a side of meat come along with two of our buttermilk pancakes

Build Your Own Pigs in a Blanket (or Not)

$6.29
Three of our delicious buttermilk pancakes and a side of sausage links. Go ahead, build em', we dare yo

Three egg omelets; served with American fries or hashbrowns, plus a side of toast

$8.19
A delicious country fried steak diced up and rolled into an omelette and topped off with country style gravy

South of the Border

$7.99
Served with salsa and sour cream. Take a trip today with this Mexican style omelet. Cheese from chili or the traditional southwest beef, add in some green pepper, tomatoes, onion and cheddar-jack cheese

$7.99
Were throwin' everything we got into this one: diced ham, sausage, bacon, onion, green pepper, tomato and mushrooms, topping it all off with cheddar-jack cheese

Build Your Own Omelet

$7.99. Made with three eggs and served with toast and hashbrowns and your choice of four ingredients. Each additional topping for only $0.55. Some exceptions may apply

Served In A Skillet

Served with two eggs and a side of toast or pancakes. Each additional ham for only $0.55. Some exception apply

$7.99
A 183 creation! Diced country fried steak on a bed of American fries, and smothered with creamy country style gravy

$7.99
A buns not going to hold this one back! A third pound fresh Angus burger chopped, topped with American cheese and topped on top American fries

$7.99. Four of the following ingredients served on top of your choice of American fries or hashbrowns. Each additional ham for only $0.55. Some exception apply

$7.99
One of our juicy country fried steaks set between two slices of bread, and smothered with country style gravy

Build Your Own Smothered Sandwich

$7.99
A chicken breast and two strips of bacon between grilled toast and American cheese. Substitute two chicken strips for no charge

$7.99
A traditional ham melt with 3 little extra in between: scrambled eggs, diced green pepper and onion

Build Your Own Melt

$7.49
Served on a sesame seed bun with lettuce, onion, tomato and mayo

Hot on a Hoagie

Served with choice of potato, soup, or a side salad

$7.99
Sliced roast beef, sauteed onions and mushrooms smothered in Swiss cheese and served with a side of au jus

$7.79
In house shaved ham topped with Swiss cheese and served on you guessed it, a hoagie bun

$8.29
Right out of the water and to your plate (with a few pit stops in between). Breaded and fried Haddock served with lettuce, tomato, and tartar sauce

$8.79
A juicy eight ounce sirloin steak Julienne cut and topped with caramelized onions and American cheese. Au jus served on the side

Served with your choice of potato, soup, or salad

$7.49
America's favorite sandwich with a flavor boost. A slice of your choice of American., Swiss, pepper-jack or Monterey-jack cheese

Build Your Own Classic

$6.29
With crumbled Parmesan and croutons

$7.99
Along with chopped onions and tomatoes, and cheddar-jack cheese

$7.99
Crunchy chicken, turkey and bacon cover this salad along with onions, tomatoes and shredded cheddar-jack cheese

$7.49
Diced bacon, tomatoes and cheddar-jack cheese atop a bed of chopped lettuce

South of the Border

$7.99
The 183 version of the Chef, Ham, turkey, green pepper, onion, tomato, mushroom, cheddar-jack cheese and a hard-boiled egg on a bed of lettuce

$8.29
A third pound of fresh angus chopped up along with onions, tomatoes and Monterrey-jack cheese

Or just sing in tune, served with your choice of potato

$7.89
Your choice of grilled or crunchy chicken, chopped bacon, onion, tomato, and cheddar-jack cheese and tossed with creamy ranch dressing

$7.89
Grilled or Crunchy chicken, onion, green pepper, tomato and cheese; set on fire with our buffalo recipe that only your salivating mouth can extinguish

All burgers are 100% fresh Angus. Add only $1.50 for one of the following: (French fries, Sweet potato fries, tater tots, baked, American, mashed, hashbrowns) soup or salad

American and Swiss cheeses, grilled onions on your choice of grilled bread
Third $6.99
Half $7.89

$10.79
Put your bib on this full pound double patty bacon cheese burger topped with lettuce, onion, tomato and mayo is just waiting to see if you can open your mouth wide enough!

$4.29
Upgrade to chili for an extra charge

Each dinner includes a side salad or cup of homemade soup, slice of toast or buttermilk biscuit, your choice of available vegetable and potato (baked, mashed, French fries, American fries, hashbrowns, or tomato slices)

$8.29
(We'd say it's better than mom makes, but we're not trying to start anything) Two thick slices of our secret recipe, fresh Angus meatloaf, topped with creamy beef gravy and steaming with flavor

$8.29
Delicious chopped beef battered and fried to a golden brown then smothered in our country style gravy

$8.99
A half pound of fresh hand pattied Angus beef topped with sauteed onions and mushrooms and creamy beef gravy

$8.49
Four ounces, seasoned and broiled to your preferred temperature and served along with our usual sides

$8.29
Four juicy strips of breaded chicken fried and served with your choice of barbecue, ranch, buffalo, or honey mustard

$9.29
Two juicy chicken breasts tenderized and lightly seasoned and served with our usual sides make up this hearty dinner

$8.19
Choice of potato and vegetable not included. Fresh Angus chopped up and mixed in with delicious marinara sauce and served with two slices of garlic toast and a side of Parmesan cheese

$8.99
Choice of potato and vegetable not included. Seasoned chicken breast and steamed broccoli tossed in our creamy alfredo sauce, served with a side of Parmesan cheese and buttered garlic toast

Perfect Choice!
You're almost ready to dine.
You can browse to see what restaurants and retailers are in your area, but you must login or create an account to use your Dining Discount Pass code.


You can browse to see what restaurants and retailers are in your area, but you must login or create an account to use your Dining Discount Pass code. CLOSE
Sorry, this account doesn't have any unused credit available.
Search for a restaurant deal
Oops! This code is invalid.